What is a cloud platform and its growing importance?

As of now in the 21st century, cloud computing is surpassing to be the most influential driving force for achieving business excellence. Numerous businesses from various industries are implementing cloud computation services and products with their business to boost up their productivity. It is a result of flooding smart devices technology and wide-spread mesh of internet access to the users and enterprises.

The highly mobile services of cloud have proven its worth in data security, improved collaborations, limitless storage, first-rate accessibility and tremendous computation power. Besides this it is arguably highly cost-proficient, giving credits to its low maintenance costs and pay-per-service features.

Sankey Solutions has its expertise in executing projects with cloud solutions and tools – AWS, MS Azure, PowerBI, Rackspace, Drupal and from various service providers. We have integrated cloud platforms for companies in industries such as media, retail, automotive, finance, manufacturing and considerably more. We have built platforms that offers over 5000+ jobs, track transaction information across 1000+ retail sites, and delivers real time digital content to its 6 million+ users.

Introduction to the industry and its leaders

According to marketandmarkets, The global cloud computing market size is expected to grow from USD 371.4 billion in 2020 to USD 832.1 billion by 2025, at a Compound Annual Growth Rate (CAGR) of 17.5% during the forecast period. While technology spending in APAC has increased, the setback due to the recent COVID-19 pandemic is imminent. The cloud technology adoption is expected to increase in sectors where the WFH initiative is helping to sustain enterprise business functions.

There is a high possibility that the top three competitors viz. Amazon Web Services (AWS), Microsoft Azure (MS Azure) and Google Cloud Platform (GCP), will hold grip on their market share over the period specified. All the 3 cloud services providers have a significant share in the market. Together the rivals hold more than 50% of the Cloud market share.

AWS has been the premier cloud service provider which launched Elastic Compute Cloud (EC2) in August 2006. At present it has 31% of the market share and have shelved 100+ Cloud Computing products for its customers.

Not following much behind MS Azure holds 20% of the market share and has gained it over the period of 12+ years since its launch in October 2008. MS Azure has a lot to serve on its platter, over 200 services in domains such as computation, IoT, AI & Machine Learning, Containers and much more.

Lacking behind in terms of market share with 7% but growing at a speedy rate giving tough time to its competitors stands GCP. It was launched in year 2011 prior to which it powered its sister business units – Google Search and YouTube. GCP is building its service portfolio at a wrap speed.

There are various geographical regions in which these service providers have set their availability zones (AV) to generate and render their services. Every availability region has certain data centers that are essentials to provide cloud services. All the 3 platforms have multiple AVs across the globe.

At present, the first mover has 25 regional set ups with multiple AVs at each region and there is a total of 80 AVs all over the world. As per the AWS website they have announced 5 more regions to be set up soon.

Whereas, MS Azure has a protocol of having maximum of 3 AVs in a region. Till date, they have 60+ AVs serving to 140 countries.

While GCP has announced 4 new Availability zones Melbourne (Australia), Toronto (Canada), Delhi (India) and Doha (Qatar). It currently has 73 AVs within 24 regions around the world which is quite impressive despite of joining in late to the race.

Virtual servers or machines are the most common product of all other services provided by any of these platforms. Virtual Machines are compute engines that helps to run application servers or helps in performing analytics and machine learning functions.

Amazon has Elastic Compute Cloud (EC2), Virtual Machine (VM) for MS Azure and Compute Engine for GCP. All the 3 performs similar functions but in speed ranking GCP stands first whereas MS Azure stands last. AWS and Azure have higher diversity within the product than GCP for customized combos.

Each of them provides database services, Relational Database Service (RDS) by AWS which provides back up, security and updates automatically. It provides choices of databases such as MySQL, MariaDB and Oracle. While Azure provides standard SQL database which requires your application to be compatible with it. GCP provides MySQL databases and there are no other options available.

AWS S3 is the object storage facility which is stored in buckets and further into root folders. It enables users to store and recover data over the internet. Azure has a similar product under the name Blob Storage that stores data in tier format in order to maintain data based on how often it is accessed. GC storage provided by the third leader helps to store and access data. It is a more advance version of Google drive that is designed for enterprises.

AWS offers Cloud Endure disaster recovery solutions to its customer by preventing loss of data due to server corruptions, center failures, or cyber-attacks. MS Azure facilitates disaster recovery (Site Recovery), it deploys replication, failover and recovery processes and help keep your applications running during planned and unplanned outages. As such GCP does not have any dedicated solution but has stated a plan guide for disaster recovery. 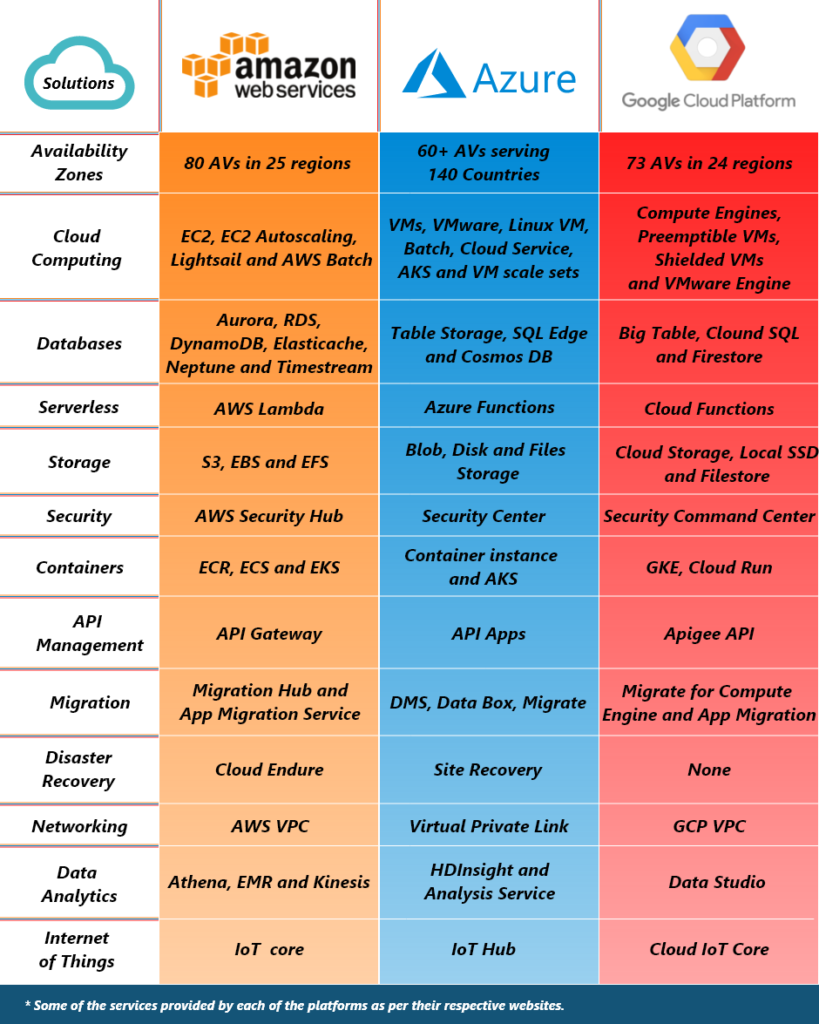 Previously, for the pay as you go services the customers were charged on the hourly usage basis, but it turned into a hiccup for various customers who required it for certain minutes in an hour and were still charged for full one hour. AWS and MS Azure switched their hourly model with the per minute model, whereas GCP has been devoted to its per second model since the dawn of providing its service.

AWS has tons of models available for each of its services for the users. Taking into consideration EC2, their most opted product, can be availed by the users for free under the AWS Free Tier scheme up to a certain limit as specified. This is free offer stands valid for 12 months of usage but the users might be charged as per the pay as you go model if they exceed the limit specified. However, there are several pricing methods that can fetch huge discounts to the customers.

For their infrastructure services they charge USD 69/mo for 2 Virtual CPUs (vCPU) and 8 GB of RAM On the other hand for their larger instances they charge USD 3.97/hour for 128 vCPU and 3.84 TB of RAM. AWS has a number of product combinations for each of its services hence they have come up with AWS Pricing Calculator for the customers to estimate their costs.

MS Azure offers its wide range of services to the customers but it has certain complications with respect to the licensing of MS products. For Virtual Machines software there are several options available you can spot purchase, pay as you go, reserve for 1 year or 3 years.

GCP similar to its fellow leaders have 4 pricing models. GCP has done a great job by pre calculating all the services cost and organizing it for the customers. GCP just USD 52 for 2 vCPU and 8 GB of RAM while it is quite cost effective in term of vCPU for larger instances – 160 vCPU and 3.75 TB of RAM.

Pros: AWS is praise for its speed and agile delivery of services, previously it took days to for customers to hire a server from its service providers but AWS’s pace enables instant access within minutes. It is also known for its top-notch capacity and now we all know that AWS was the first cloud service provider and thus it holds the first movers’ advantage in terms of market experience and customer knowledge.

Cons: AWS being an American company has offered all of its services in that region but many products that are being advertised by AWS are not available all over the world. It also provides tech support services for its customers that is too steep for the customers.

Pros: Azure being a MicroSoft product has ability to integrate with other MS products which are quite prominent in enterprises solutions market. This integration throttles down the issues faced while configuring with other software solutions. This also build brand loyalty of the brand. It has a robust security profile as compared to the other two which works on standard security model.

Cons: Along with the highest number it also lists the highest prices of services than its two counterparts. MS Azure customers have reported unsatisfied reviews with respect to the performance of their products. In addition to it faced the biggest downtime – 40 hours and 17 minutes.

Pros: GCP is the most cost effective amongst the three leaders of the market, their pay per second used model justifies their charges and it also has better discounting schemes. Live Migration helps the process of running the Virtual Machines form one physical server to another without hampering its availability to the user. So far, GCP has reported the lowest down time – 14 minutes.

Cons: GCP relatively new the market is lacking behind in providing services which are available with the rivals. It is considered as a secondary service provider especially to AWS which is the market leader due to its vast experience in the field. When it comes to downloading data from the cloud storage GCP doesn’t seem to be very pocket-friendly.

AWS is preferable for the companies which have a wide spread operations around the world. AWS has a huge catalogue of services to offer to its customers who can leverage AWS’s robust systems and capacity. Some of the companies that opted for AWS are Facebook, Unilever, Netflix, Twitter, and Adobe.

If your enterprise runs on Windows OS and is MS centric pertaining to software and enterprise tools, then it would be preferable to choose MS Azure due to its ease of configuration with your current system. Samsung, eBay Boeing and BMW are some of the companies who opted for Azure.

Regardless of its late entry GCP has showed immense competence in the cloud domain, it is steadily growing and maybe someday reach to the level of the leaders. GCP has been picked by PayPal, P&G, Snapchat and Ups.

Post Script: These are quite broad means to select one of the services, it would be advisable to acquire consultation as the choices and implementation may differ as per business heterogeneity. Feel free to contact us for any query or consultation.